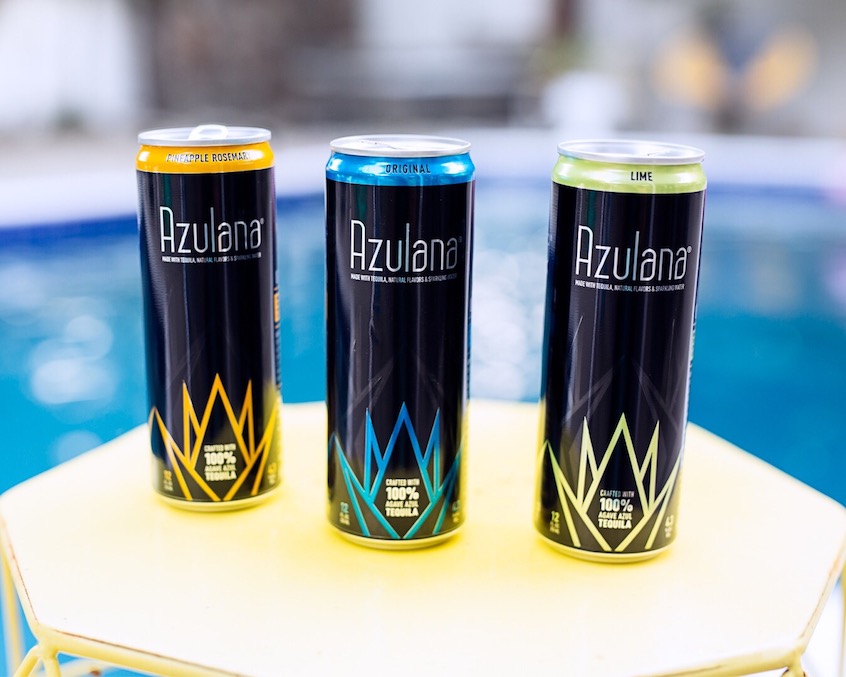 Azulana, the first and only ready-to-drink beverage made with 100% blue agave tequila and sparkling water, has announced the product will now be available in four additional US states – Tennessee, Texas, Minnesota and Indiana – just in time for Summer.

LOS ANGELES – Azulana, the first and only ready-to-drink beverage made with 100% blue agave tequila and sparkling water, has announced the product will now be available in four additional US states – Tennessee, Texas, Minnesota and Indiana – just in time for Summer. This expansion into the Midwest and Southern regions of the US reflects a 400% increase in Azulana’s overall distribution.

Produced by Pure Azul Beverage Company, Azulana launched in Los Angeles in August 2019, and has since expanded into additional Southern California markets including San Diego, Orange County and Palm Springs. Since its debut, Azulana has seen steady growth in sales, and has received consistent, overwhelming positive consumer feedback. These factors combined with the substantial consumer appetite for ready-to-drink cocktails ultimately influenced Pure Azul’s decision to launch Azulana in multiple new markets this month.

“As our culture is shifting, so are our tastes and preferences. Now more than ever, consumers value convenience, consistency, and quality ingredients above all else,” said Katie Pittman, Head of Sales and Marketing for Azulana.

Pure Azul Beverage Company’s expansion comes at a significant moment for the spirits business overall. “Spirits sales have been hitting record breaking figures in the past few months, with tequila serving as a significant driver of those numbers,” said Jason Michelson, Head of East Coast Sales for Azulana. “Similarly, the ready-to-drink beverage trend continues to thrive among today’s consumer, as many of us are looking for a one-stop crafted cocktail that is both easy and enjoyable to consume, sans the hassle and expense that comes with purchasing multiple ingredients and making our own cocktails at home. We truly feel it’s the right time to bring Azulana to a national audience, and we couldn’t be prouder of the product we created.”

Azulana comes in three flavors – Original, Lime, and Pineapple Rosemary – contains 4.3% ABV and 144 calories per 12-ounce serving. The beverage is produced in Guadalajara, widely recognized as the birthplace of tequila. Azulana is gluten-free and is naturally sweetened with agave nectar, which provides nuanced and unexpected flavor, as well as smooth consumption.

In addition to partnerships with key California retailers and alcohol delivery services like Drizzly and Sipsy, Azulana also gained significant early exposure through their partnership with the iconic Pasadena Rose Bowl. Introduced during The Rolling Stones much-anticipated concert at the venue last Summer, and named the venue’s “Official Sparkling Tequila” shortly thereafter, Azulana has since become a fan favorite for attendees at Rose Bowl sporting and live entertainment events.

Specific retail locations and delivery services that will offer Azulana in each market can be found on the brands website (www.azulana.life). Pure Azul Beverage Company also plans to launch across additional US states later this Summer.

Founded in 2019, Azulana Sparkling Tequila is produced by The Pure Azul Beverage Company, headquartered in Southern California. Azulana is harvested in Guadalajara, in the Jalisco region of Mexico. Azulana is committed to investing in programs that improve the quality of life for their employees, and environmentally friendly production methods that helped eliminate waste. Azulana was named the “Official Sparkling Tequila” of the Pasadena Rose Bowl in late 2019. www.azulana.life