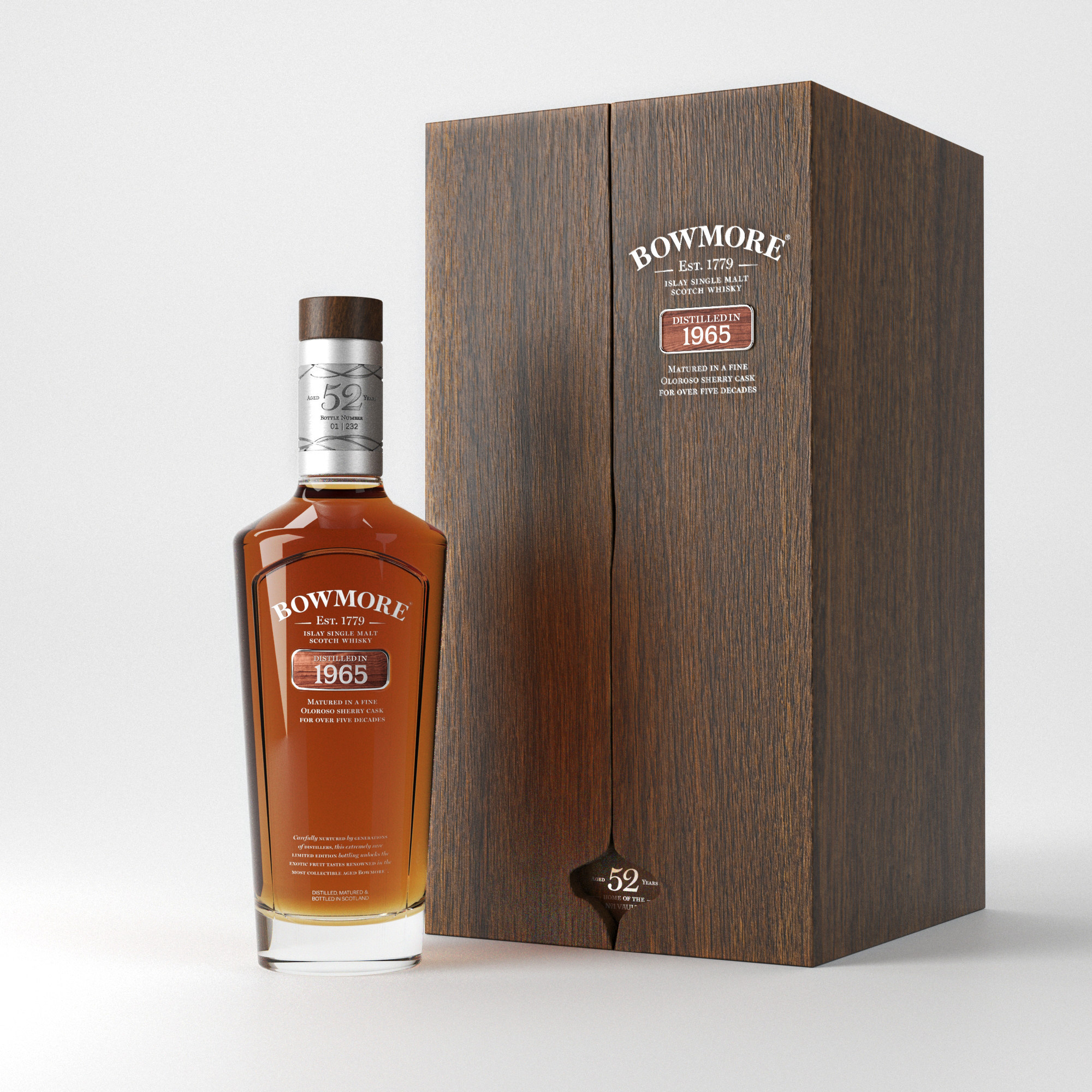 Bowmore®, the oldest licensed distillery on Scotland’s isle of Islay, has announced the release of Bowmore® 1965 Single Malt Scotch Whisky, the latest expression in the 50 Year Old Vaults Series.

Matured for 52 Years, this is the Fourth Edition From The Bowmore® 50 Year Old VAULTS SERIES

Bowmore® 1965 has matured for 52 years at Bowmore distillery, the home of the world’s oldest Scotch maturation warehouses, the No. 1 Vaults. This extended maturation period has created a rare and refined whisky with the perfect blend of complexity and elegance, exemplifying Bowmore’s history spent perfecting the art of whisky maturation.

Only 232 bottles of the rare Bowmore 1965 have been produced for the world and will be available as of this December with a suggested retail price of $30,000 (750ml).

BOWMORE® ISLAY SINGLE MALT SCOTCH WHISKY RELEASES BOWMORE® 1965 FROM ONE OF THE WORLD’S OLDEST SCOTCH MATURATION WAREHOUSES. Matured for 52 Years, this is the Fourth Edition From The Bowmore® 50 Year Old VAULTS SERIES.

BOWMORE® ISLAY SINGLE MALT SCOTCH WHISKY RELEASES BOWMORE® 1965 FROM ONE OF THE WORLD’S OLDEST SCOTCH MATURATION WAREHOUSES. Matured for 52 Years, this is the Fourth Edition From

Bowmore 1965 is the latest expression in the Vaults Series, a collection of the rarest whiskies from the home of the No. 1 Vaults. The liquid was one of the first to pass through Bowmore’s then-new steam heated stills in 1965, benefitting from smoother heating and greater control, enabling the distillery to craft a spirit that was perfectly primed to mature over many decades.

The expression is a rich reward for those who value the importance of savoring time, with plenty of time spent carefully perfecting every single element of the whisky making process when creating the release.

“Bowmore 1965 demonstrates the rewards of our meticulous aging process and showcases the quality of whiskies coming from our passionate and dedicated distillery team,” says David Turner, Bowmore Distillery Manager. “The 1965 expression comes from a golden era of distillation and adds another fine single malt to the Bowmore portfolio. The latest addition in our 50 year old Vaults series is sure to obtain legendary status among collectors and whisky enthusiasts.”

This remarkably rare limited-edition bottling has, over its 52-year maturation, unlocked the rich fruit and balanced smoke tastes distinctive of 1960s Bowmore whiskies, which have been savored by connoisseurs worldwide and are renowned as some of the most collectible Bowmore expressions. An outstanding expression, Bowmore 1965 has been elevated to legendary status through maturation that showcases the iconic fruit notes and deep flavors that are revered in Bowmore single malts. On the nose, Bowmore 1965 offers elegant bursts of fragrant fruits, sweet bees wax and intense dark chocolate, developing into burnt heather and a fresh spring flower finish. Perfectly balanced with a touch of jasmine, dried fruit and apricots, this single malt is best savored neat.

THE 1965 BOWMORE BOTTLE AND WOOD CASE

Sitting at the pinnacle of Bowmore’s portfolio, Bowmore 1965 is presented in a hand-blown glass bottle boasting sterling silver adornments and is housed in a hand-crafted cabinet made from Scottish oak.

Founded in 1779, Bowmore is the oldest licensed distillery on Islay, one of the Scottish isles which make up the region known as the ‘Islands’ in the lexicon of Whisky. The other regions are the Highlands, Speyside and the Lowlands. Islay malts are famous for their characteristic smokiness and Bowmore® is no exception; the malt is carefully smoked in a peat-fired kiln, using skills honed over two centuries to craft a perfectly balanced Single Malt.

Time is savoured at Bowmore and the distillery’s adherence to traditional production methods helps to shape the character of its Single Malts. Today, it prides itself as one of the rare distilleries which still produces its own floor malted barley, hand-turned by a traditional wooden malt shovel and hand drawn machinery. Water for the whiskies is specially drawn from the Laggan River, with its rich peaty overtones – the same Islay peat that fires the malt-drying kiln.

Bowmore Distillery’s close proximity to the sea is also vital in determining the final character of its spirit. The legendary Bowmore® No. 1 Vaults is where most of the whiskies spend their long lives resting quietly in the cool, dark, damp cellars below sea level, oblivious to the waves thrashing the vault’s sea-facing wall.

They mature in oak casks, previously used for bourbon, sherry or claret, gradually developing rich and mellow flavours until the expertise of our whisky makers deems them ready for bottling. It is this combination of peat, barley, sea breeze, water, wood, people and tradition that together create the perfectly balanced warm and smoky character of Bowmore® Single Malt Scotch Whiskies. Through peerless maturation expertise and sense of timing, Bowmore® is “Time, Savoured” – a rich reward for those that appreciate the value of time and an exquisite whisky coveted the world over.

Beam Suntory was created in 2014 by combining the world leader in bourbon and the pioneer in Japanese whisky to form a new company with a deep heritage, passion for quality, innovative spirit and a vision of Growing for Good. Headquartered in Chicago, Illinois, Beam Suntory is a subsidiary of Suntory Holdings Limited of Japan. For more information on Beam Suntory, its brands, and its commitment to social responsibility, please visit www.beamsuntory.com and www.drinksmart.com.