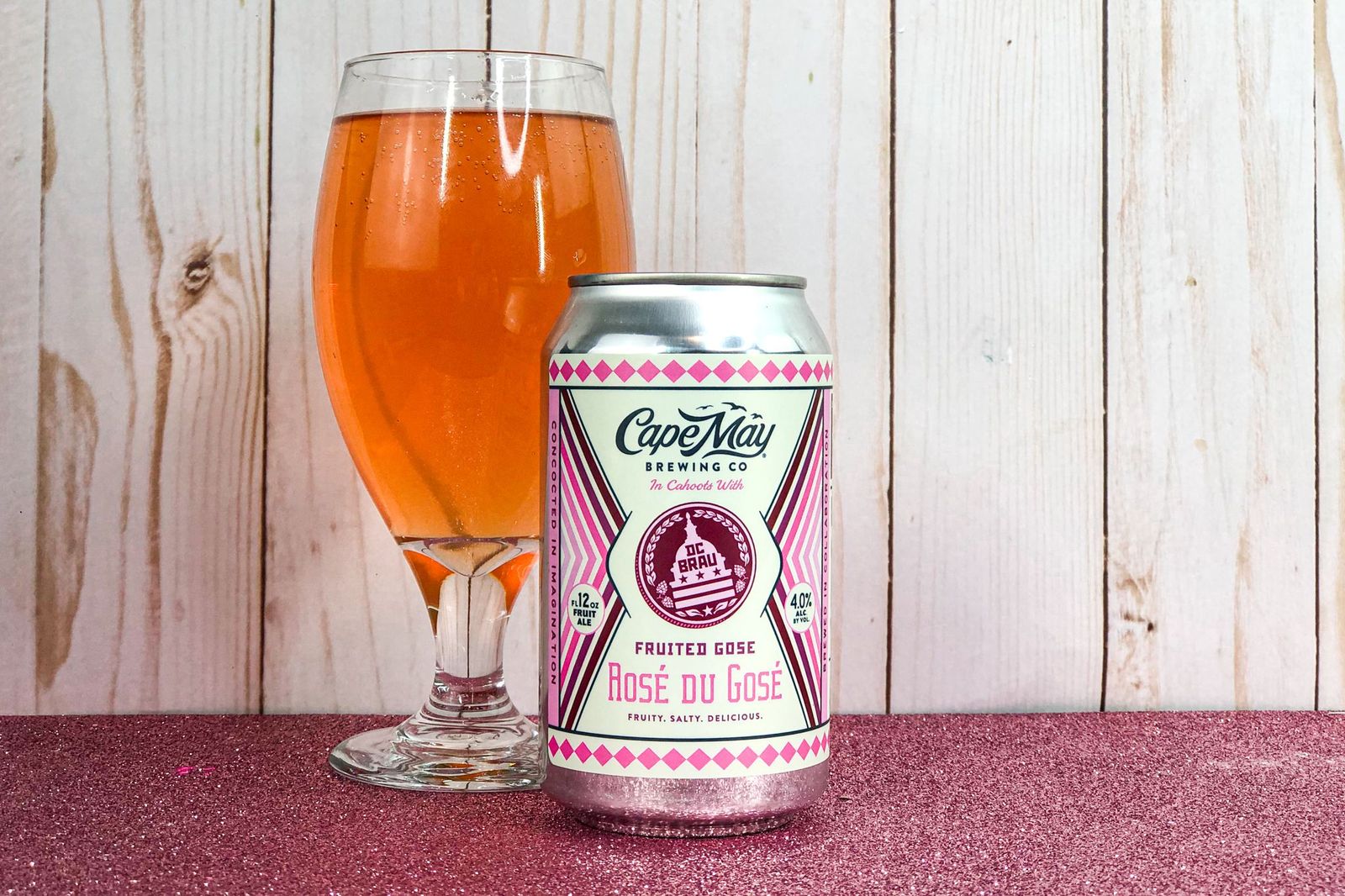 The summer of 2020 will long be remembered for a lot of things — not all especially fondly — but Washington’s DC Brau Brewing and South Jersey’s Cape May Brewing Co. hope to make it all a little rosier with the joint release of their re-collaboration of ROSÉ DU GOSÉ.

Washington, DC — July 2020 — The summer of 2020 will long be remembered for a lot of things — not all especially fondly — but Washington’s DC Brau Brewing and South Jersey’s Cape May Brewing Co. hope to make it all a little rosier with the joint release of their re-collaboration of ROSÉ DU GOSÉ.

Brewed with more than 700 pounds of strawberry and peach puree, Rosé du Gosé (4% ABV) is a simple, yet complex brew that boasts fruit-forward flavors and aromas accented by a light minerality with distinct sour notes coupled with a light body and a crisp dry finish.

“It is such a playful take on a kettle sour,” says Brandon Skall, CEO & Co-Founder of DC Brau. “It has a touch of salinity, just enough to hit the gose style right on the nose and the blush character makes this Rosé the perfect alternative to its cousin from Sancerre.

While COVID-19 put a wrench in plans for the two brewing teams to visit each other to recreate the beer, Cape May Brewing Co.’s CEO & Co-Founder Ryan Krill explains how this collaboration was a little different.

“We did everything remotely,” says Ryan. “This is such a weird time. Luckily, we figured out an alternative way to reach out, engage, and have some fun.” The brewing teams collaborated remotely via phone and video conferencing before getting a little creative on their respective brew days, sending life-size cutouts of team members to keep each other company in lieu of traveling.

The two breweries originally collaborated on the kettle sour — a first for DC Brau at the time — in 2018 to debut at SAVOR that June. Unfortunately for Cape May fans, that batch never made it up to New Jersey. This summer however, Rosé du Gosé will be a featured brew in Cape May’s Tasting Room-Only program, exclusively available in their tasting room and beer garden, beginning this Friday, July 17th. DC Brau plans to distribute 12-ounce cans and kegs of Rosé du Gosé to select accounts throughout the Washington, DC region, as well as sell 6-packs and crowlers via their online portal (dcbrau.com/order) for delivery and contactless curbside pick-up at the brewery starting later this week.

About Cape May Brewing Company:

Once upon a time, 20-something Ryan Krill earned a six-figure salary working in finance and real estate development in Manhattan, while his college roommate, Chris Henke, designed commercial satellites. During a summer weekend at the Jersey shore, they brewed a batch of beer with Ryan’s dad. “Should we open a brewery?” Ryan asked, only half-serious. But, by the following year, the three guys had secured a space at Cape May Airport where they concocted a makeshift brew system and honed their beer-making skills. In 2011, they started with one client. Today, there are hundreds of accounts in New Jersey and Pennsylvania proudly serving the guys’ award-winning recipes. And CMBC’s fearless leaders have never looked back.

When co-founders Brandon Skall and Jeff Hancock opened the doors to their brewery in 2011 on Bladensburg Road in NE Washington, DC Brau Brewing Company became the first packaging brewery inside the District of Columbia since 1956. In addition to DC Brau’s award-winning craft beers, including The Public (Pale Ale), The Corruption (IPA), Joint Resolution (Hazy IPA), Brau Pils (German-style Pilsner), and On the Wings of Armageddon (Double IPA), the brewery introduced a new line of hard seltzers under the Full Transparency banner in 2019. For more information on DC Brau, visit www.dcbrau.com, and follow on social media @dcbrau.