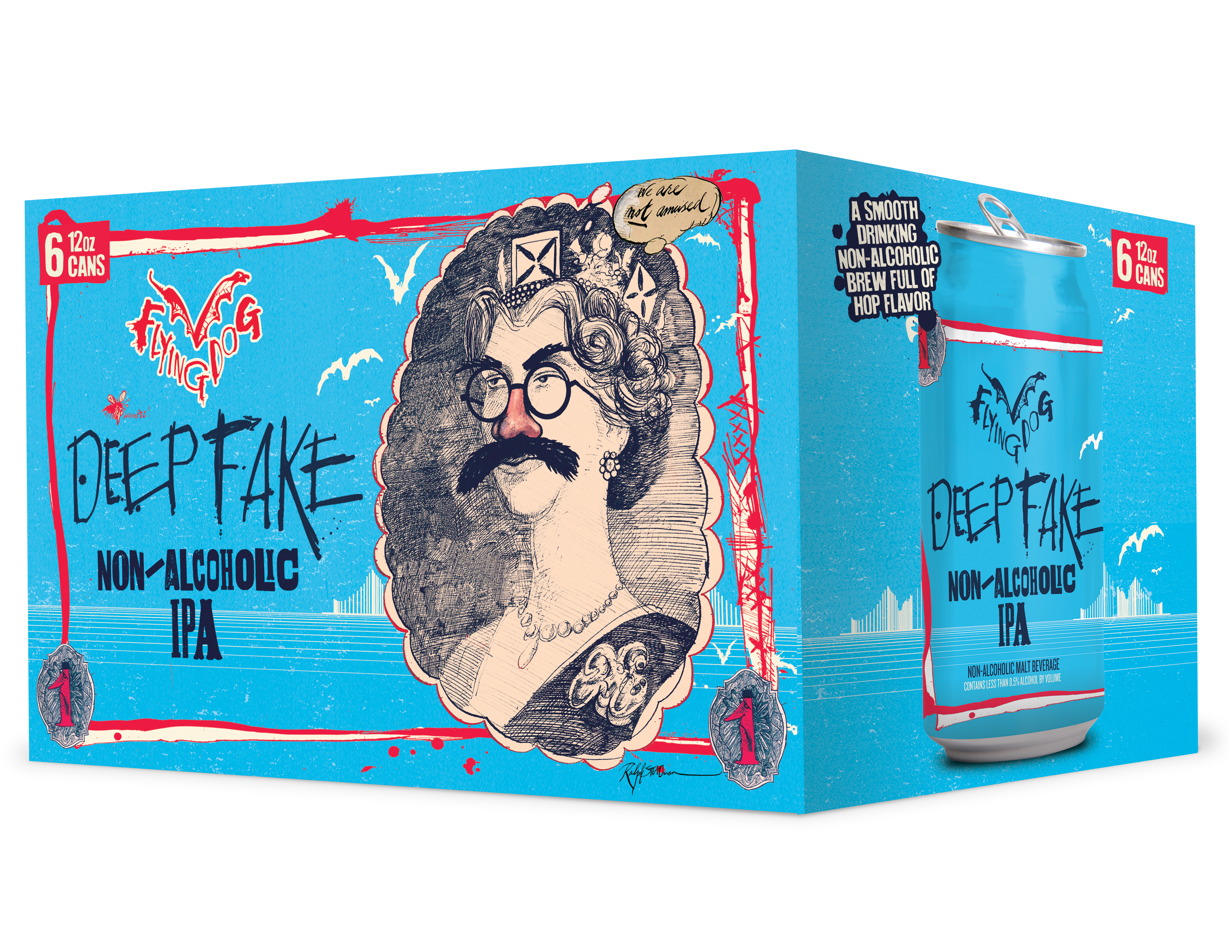 Deepfakes are getting harder and harder to spot these days and Flying Dog Brewery’s latest release is no different.

Frederick, Md. – Deepfakes are getting harder and harder to spot these days and Flying Dog Brewery’s latest release is no different. What looks like a delicious IPA from the Frederick-based brewery, wrapped in original Ralph Steadman art and all, is actually the brewery’s first non-alcoholic release, and one that will make you question everything you thought you knew about non-alcoholic beer.

What on the surface smells and tastes like an IPA is in fact a masterful forgery engineered to trick the senses. Using Mosaic, Simcoe and Citra hops, Flying Dog’s innovative brewers have crafted a smooth-drinking brew with an aroma and flavor profile dominated by hop notes of orange, grapefruit, mango and passionfruit.

“Choosing a non-alcoholic beer shouldn’t mean suffering through a tasteless, watery imposter,” said James Maravetz, VP of Marketing at Flying Dog Brewery. “Deepfake gives you the satisfaction of drinking a real beer, without the added calories and alcohol. It would fool anyone.”

While the NA market has dramatically improved in recent years, Deepfake’s hop dominant flavor profile raises the bar. The experts in Flying Dog’s brewhouse went back to their beer school notebooks and tweaked each and every part of the brewing process to ensure they were capturing the maximum flavor compounds every step of the way. The result is a delicious IPA-imposter with a medium body and clean finish. For consumers who want to avoid alcohol for any reason, but don’t want to sacrifice the taste and feel of the real thing, Deepfake is the perfect illusion.

Deepfake Non-Alcoholic IPA is the brewery’s first NA release and the newest addition to their year-round lineup. The NA IPA starts shipping to distributors on July 2, 2021 in 6-packs of 12 oz. cans.

About Flying Dog Brewery:
As one of the fastest-growing regional craft breweries in the United States, Flying Dog has been brewing world-class beer that pushes the confines of traditional styles for 30 years. Flying Dog attracts everyone from craft beer connoisseurs to those just catching the wave with up to 20 styles available at any given time. Introduced to Flying Dog by the Gonzo writer Hunter S. Thompson, artist Ralph Steadman has produced original art for Flying Dog’s labels since 1995. Recent accolades for Flying Dog include its Pale Ale ranked as the #1 American Pale Ale in the U.S. by The New York Times. For more information, visit www.flyingdog.com.