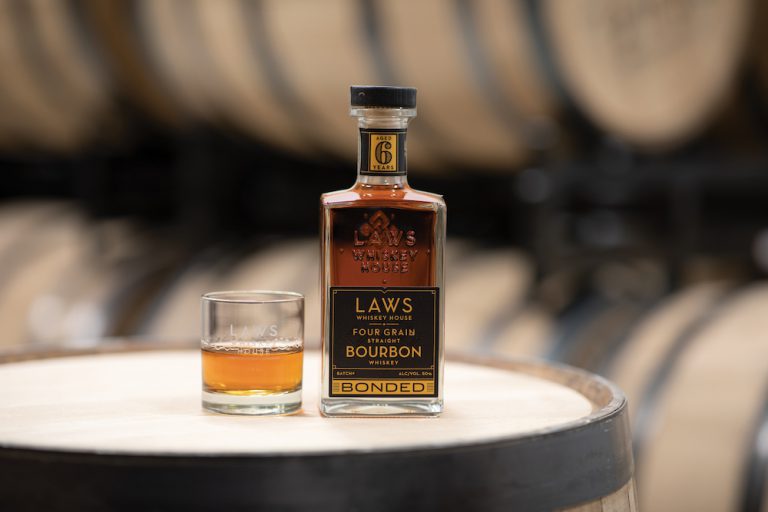 Laws Whiskey House, the award winning Denver based distillery, is proud to announce the annual release of its Bottled in Bond Four Grain Straight Bourbon.

DENVER, CO— Laws Whiskey House, the award winning Denver based distillery, is proud to announce the annual release of its Bottled in Bond Four Grain Straight Bourbon. Aged six years, this distinctive offering of the company’s flagship bourbon exemplifies the craftsmanship, patience, and perseverance that are the hallmarks of the Laws There Are No Shortcuts mantra. This whiskey has an SRP of $75 and is now available across Laws national distribution footprint with approximately 500 9L cases produced.

As the first Colorado distillery to produce a bonded whiskey, Laws Whiskey House continues to set the standard for Bottled-In-Bond expressions. Since that inaugural release, Laws has expanded their Bonded portfolio to six different expressions including Bourbon, Rye, Malt, Wheat, and Corn whiskies.

“Patience is an important part of all excellent whiskey,” says founder and CEO Al Laws. “Time in conjunction with the vintage nature of the Bottled in Bond act creates the basis for this special release. For Laws Whiskey House, Bottled-In-Bond expressions are ingrained in our culture. They exemplify who we are as whiskey makers.”

The Bottled-In-Bond Act of 1897 was an important turning point in the history of bourbon that set forth exacting standards that offered consumers a guarantee of transparency, process, and quality. Specifically, it stipulated that the whiskey must be the product of one distilling season, from one distillery, aged in a federally bonded warehouse for at least four years, and bottled at 100 proof. 123 years later, this designation continues to offer those same guarantees, providing consumers with the knowledge of where, how, and when Bourbon was produced and aged.

Established in 2011, Laws Whiskey House is a purpose driven, grain to glass whiskey distillery founded on the principle that the soul of its whiskey is comprised of the people who grow it, the people who make it, and the people who drink it. Using the traditional method of open-air, on grain fermentation, Laws’ whiskeys feature high altitude grown American mother grains and mountain spring water while aging in 53-gallon charred American oak barrels. With a collection of award-winning whiskey, including several Bottled in Bond expressions, Laws Whiskey House invites you to visit their tasting room in Denver’s historic Gates neighborhood and enjoy the Laws experience. For more information visit www.lawswhiskeyhouse.com.