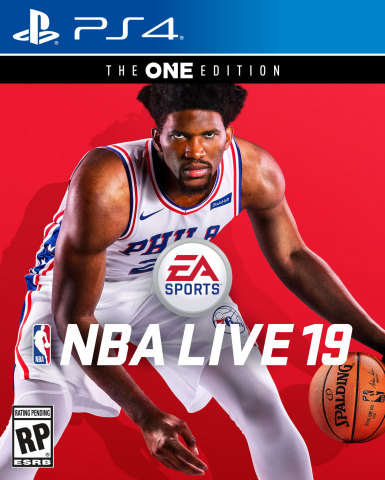 Last night at the NBA Awards, Electronic Arts Inc. (NASDAQ: EA) revealed Joel Embiid as the cover athlete for EA SPORTS™ NBA LIVE 19, adding to the accolades he has achieved over the past few years.

REDWOOD CITY, Calif.–(BUSINESS WIRE)– Last night at the NBA Awards, Electronic Arts Inc. (NASDAQ: EA) revealed Joel Embiid as the cover athlete for EA SPORTS™ NBA LIVE 19, adding to the accolades he has achieved over the past few years. Embiid was the third overall pick of the NBA Draft 2014 presented by State Farm and claimed a spot on the All-Star roster for the first time this season. He also led his team to their first playoff appearance since 2012 while averaging nearly 23 points and 11 rebounds a game.

“Joel is a perfect fit to grace the cover of NBA LIVE 19,” said Joshua Rabenovets, Senior Brand Director at EA SPORTS. “He is the voice of the new wave of basketball players and his on-court dominance, creative personality, and love for the fans made him an ideal choice for this year’s game.”

“It’s great, it’s amazing. I’m thankful for this opportunity, especially as a basketball player,” Embiid said. “You work so hard because you have goals in life, you want to be in the Hall of Fame, but also, being on the cover of a video game is something I’ve always dreamed of and I’m happy to be in this position.” Read the rest of the interview here.

NBA LIVE 19 will empower players to build their squad and take on the world, one court at a time. Embiid will be joined by several other prolific ballers that will revealed over the coming weeks, each of which has a special connection to NBA LIVE. Stay tuned for the next reveal in The Streets, coming early July.

Players who need even more basketball in their lives can also check out NBA LIVE Mobile, available as free-to-download** on the App Store and Google Play.

NBA LIVE 19 is developed by EA Tiburon and will be available worldwide September 7 on Xbox One and PlayStation 4.

EA Access members receive an additional 10 percent discount*** when they purchase a digital version of NBA LIVE 19, on Xbox Live. Subscribers can also enjoy up to 10 hours of play time as part of the Play First Trial on August 31st.

Electronic Arts (NASDAQ: EA) is a global leader in digital interactive entertainment. The Company develops and delivers games, content and online services for Internet-connected consoles, mobile devices and personal computers. EA has more than 300 million registered players around the world.

In fiscal year 2018, EA posted GAAP net revenue of $5.2 billion. Headquartered in Redwood City, California, EA is recognized for a portfolio of critically acclaimed, high-quality brands such as The Sims™, Madden NFL, EA SPORTS™ FIFA, Battlefield™, Need for Speed™, Dragon Age™ and Plants vs. Zombies™. More information about EA is available at www.ea.com/news.

EA SPORTS, Battlefield, The Sims, Need for Speed, Dragon Age, and Plants vs. Zombies are trademarks of Electronic Arts Inc. John Madden, NFL, NBA, UFC, NHL, and FIFA are the property of their respective owners and used with permission.

PlayStation is a registered trademark of Sony Computer Entertainment, Inc.

*REQUIRES PERSISTENT INTERNET CONNECTION, EA ACCOUNT, ACCEPTANCE OF EA USER AGREEMENT AND PRIVACY & COOKIE POLICY, AND A XBOX LIVE GOLD OR PLAYSTATION PLUS SUBSCRIPTION (BOTH SOLD SEPARATELY). MUST BE 13+. DEMO IS PRE-RELEASE SOFTWARE, MAY CONTAIN ERRORS/DEFECTS AND IS PROVIDED “AS IS” WITHOUT ANY EXPRESS OR IMPLIED WARRANTY.