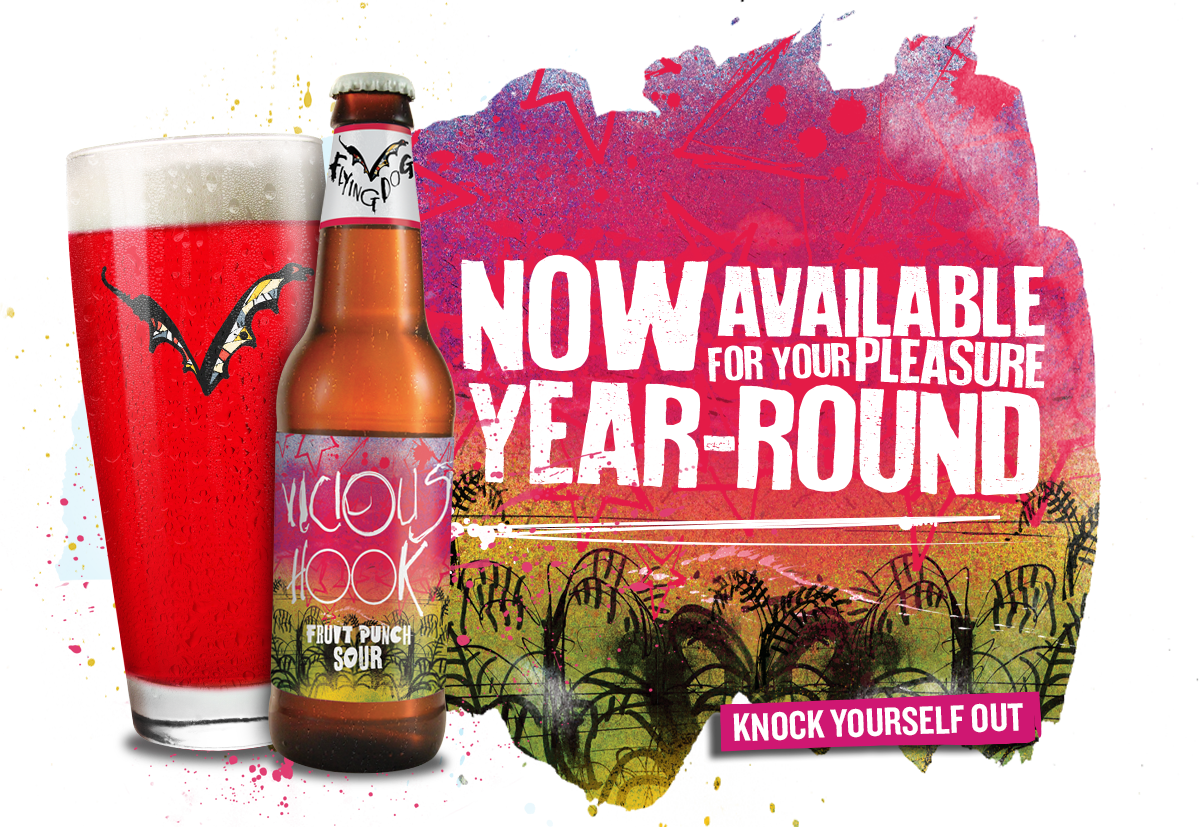 Flying Dog Brewery’s first major sour release, a fruit punch sour ale named Vicious Hook, proved to be a total knockout with consumers when originally released in August of 2020 and has now been moved to an official year-round offering in the brewery’s portfolio.

Frederick, Md. – Flying Dog Brewery’s first major sour release, a fruit punch sour ale named Vicious Hook, proved to be a total knockout with consumers when originally released in August of 2020 and has now been moved to an official year-round offering in the brewery’s portfolio.

Vicious Hook is a one-two combo of sweet and tart that stuns you with a pucker punch. Delivering on its fruit punch promise, Vicious Hook’s big, juicy, tropical flavors pop, making this an innovative sour that offers high pucker and low bitterness.

“When the team was developing this recipe we knew we had something special, we’re just glad our fans agreed,” said Ben Clark, Brewmaster at Flying Dog Brewery. “My favorite aspect of the beer is the hint of nostalgia in the flavor and aroma. The beer smells and tastes just like the fruit punch we had when we were kids, with an added kick to transform it into a delicious adult version.”

Originally pitched as a part of the company’s Brewhouse Rarities program, Vicious Hook started off as a mere twinkle in the eye of a Flying Dog employee. Once developed, those lucky enough to try early samples hailed it as being “as addicting as a pocket full of sweet tarts,” and begged for more. Vicious Hook offers a perfect balance of sweetness and tartness with a 5.3% ABV.

The name Vicious Hook is a boxing term, referencing the beer’s sweet start that finishes with a savage jolt of sourness and hits like a heavyweight. Flying Dog began shipping Vicious Hook to distributors again in January. Consumers are encouraged to visit the brewery’s Beer Finder to locate inventory near them: flyingdog.com/beer-finder.

As one of the fastest-growing regional craft breweries in the United States, Flying Dog has been brewing world-class beer that pushes the confines of traditional styles for 30 years. Flying Dog attracts everyone from craft beer connoisseurs to those just catching the wave with up to 20 styles available at any given time. Introduced to Flying Dog by the Gonzo writer Hunter S. Thompson, artist Ralph Steadman has produced original art for Flying Dog’s labels since 1995. Recent accolades for Flying Dog include its Pale Ale ranked as the #1 American Pale Ale in the U.S. by The New York Times. For more information, visit www.flyingdog.com. Flying Dog is now available on Drizly.